while trapped in a car for 30 hours. 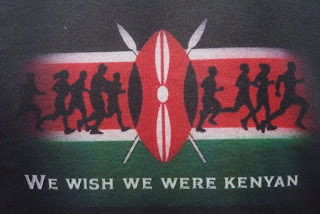 Some other favorite team names included:
Myasis Dragon
Half-fast Runners
We've got the Runs (grody, I know. But so funny.)

was more fun than I had even imagined.
Here are some pictures. More stories and details will follow. (There are some good ones, trust me.)
Me and my roommate Merry, heading out the door 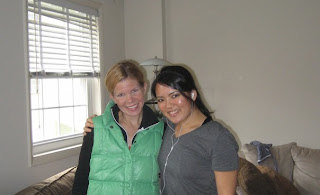 Our van, looking happy and optimistic. (In other words, this picture was taken before any of the actual running started.) 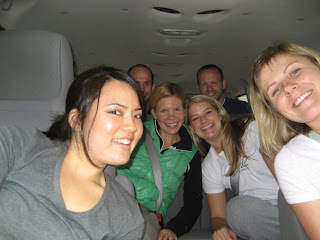 Stretching our legs. There's only so much room in those vans, so you do what you can. (Notice Erica's disembodied face? I think that's my favorite part.) 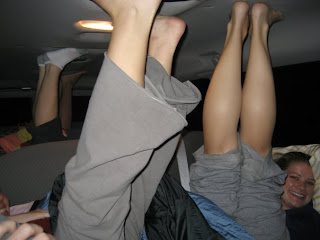 As it turns out, nobody looks that cool wearing a headlamp, reflective vest, and tail light. 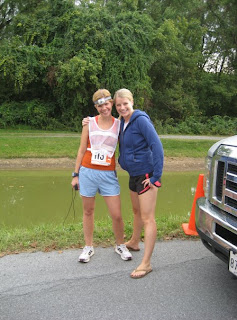 Still looking happy. I think this was right after I happily discovered that my friends found my obsession with Air Supply amusing instead of annoying. That's when I realized just how much I love these people. If that's not true friendship, I don't know what is. 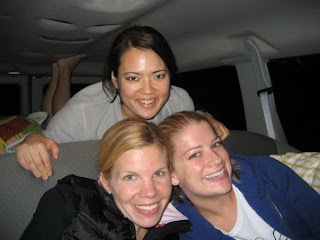 At our post-race pizza party (minus Erica - she's still a newlywed, so decided that going home would be more fun.) 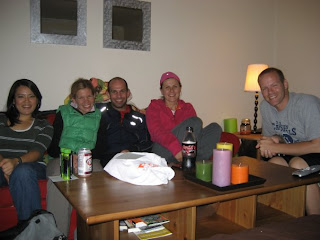 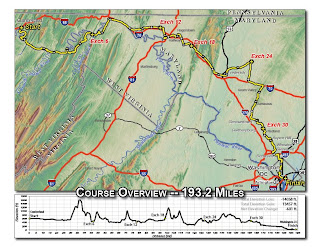 This Friday, I am climbing into two vans with 11 friends and driving the 193 miles to Cumberland, MD.

Then we are running home.
Don't worry, we're taking turns doing the running. I'm only doing about 18.7 of the miles. (I think.)
Then there's the National Book Fair in DC! If I'm not too tired, I may meander over to the mall to hang out with other book-lovers.
Up next: Philadelphia half marathon in November. (Right, Erica?!?) 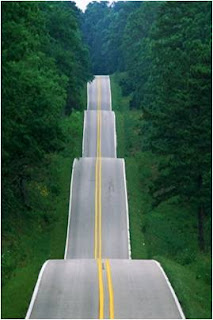 I showed this picture to my AP class last week during our discussion of circular motion and asked them what it was a picture of.
After an awkward pause, I finally asked Kevin to help us out.
After another awkward pause, he finally said "Um, a loop-the-loop"?

I ordered a book from half.com the other day for my class.

It ships from Gaithersburg, MD, which is about 5 minutes away from where I live in Kensington.
Yesterday, it shipped.
Today, it is in New York.

Since about half the women I work with are currently pregnant, I obviously had to share with all of them the story of my niece's birth. (She was born in the front seat of the car while my brother-in-law attempted to flag down help.)

Since we were on the topic of childbirth, my co-worker Tom told me about when his wife was in labor with their first child. He put together an Excel spreadsheet that allowed him to enter the timing and duration of contractions and would signal an alarm when it was time to go to the hospital. Or something. I'm still not really clear why he needed an Excel spreadsheet, but at the time, it was his pride and joy.
I thought he was joking, because he has a tendency to make fun of his own dorkiness. (He wasn't joking.)
Unfortnately for him, by the time Excel let him know it was time to leave for the hospital, his wife was out the door and waiting in the cab. She almost gave birth in the car.
Lucky for her, they made it to the hospital in time to deliver.

welcome to the family.

love your name.
can't wait to see you! promise me you won't grow too much in the next two months.
your favorite aunt,
poodle

Today was the first day of school. It is good to be back.

I received exactly 12 compliments on my shoes, so I consider the day a smashing success. (Although my feet are in pain.)
The freshmen boys that I teach are each approximately 4 feet tall, but make up for it with enthusiasm. However, they are so not intimidated by me. I find that partly charming and partly scary.
My AP students blew me away with how much they remember from last year. Those kids rock my world.

The Book Thief: The middle 300 pages dragged a little bit. (or a lot...) But the ending was phenomenal, and totally worth the wait. I would recommend this to just about anyone.

The Time Traveler's Wife: I'm still trying to figure out how this book is a national bestseller. I have lost all faith in the American public. Sigh.

Funny in Farsi: It is pretty funny. Too bad it's not very well written. But it's short, and definitely an enjoyable read.

My Sister's Keeper: Overall, it was a quick, enjoyable read, but the ending was such a cop-out. You cannot write a book entirely about a major moral dilemma, and then avoid resolving it.

Animal, Vegetable, Miracle: While it was interesting, I have to admit I couldn't read it straight through. It's the kind of book I had to read small portions of at a time. It did, however, inspire me to support local farmers by signing up for Washington's Green Grocer delivery service.

The Brief, Wondrous Life of Oscar Wao: Erica and I are starting a book club to make sure we still hang out even though she ran off and got married. Who wants to join?

Into Thin Air: I read and thoroughly enjoyed Into The Wild, so I'm looking forward to this one.

I am totally doing this in my class this year. (only on a slightly smaller scale. I'm thinking maybe a large plastic rectangular container.) Honestly, can you think of a better way to introduce non-newtonian fluids? I sure can't.

which poodle do you think i am?

And because my school gave me a new laptop (even though I knocked mine off of the table last year with my high heel. Apparently they were amused by my "high price of fashion" email.)

We started off the trip with a long (very long) flight to Dubai. Jana slept. Phil and I caught up on the past 4 years. At the beginning of the flight, we were looking happy and alert. (for probably the only time on the trip.) 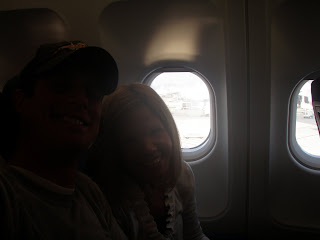 Jana was convinced (really, truly convinced) that if she looked cute, a Frenchman would take pity on her and lead her to the front of the security line. She got all dressed up for the occasion, but alas, we still had to wait in line, just like everybody else. Poor Jana. 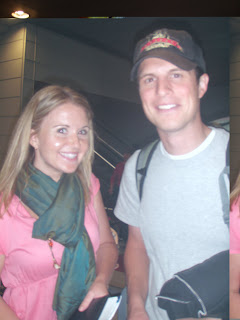 i know, i know

I promised i would be back on Monday with pictures and stories.

Today is Wednesday. No pictures, still.

But yesterday, I went on a faculty bonding retreat that involved ropes courses and swimming through some rivers. Which was great. I love our back-to-school "meetings."

I get to go back next week with the freshmen. I am thoroughly looking forward to watching 75 ninth graders carry their overnight packs through a river. And sleeping in a treehouse.

Tomorrow, I actually have some free time in my schedule, so I will post so much more.