just in case you were wondering

Bacon-wrapped jalepeno poppers are an excellent pre-run snack.  I had two of them right before my run today, and felt awesome.

Also, homemade jalepeno poppers are way better than frozen ones.

I recently made a Texas sheet cake for a barbecue I went to.  While it was a huge hit, everyone kept complimenting me on how good my "brownies" were.

Yesterday at the gym, all of the treadmills in front of the mirror were taken, so I couldn't stare at myself and admire how fantastic my hair looks after going 3 days without washing it.  Instead I was forced to stare at the trainers.  Bummer.

I completed my second ever triathlon on Saturday up in Perryville, MD (North of Baltimore right on the Chesapeake).  They had an international distance and sprint distance - since I only signed up 2 weeks ago and hadn't been in a swimming pool in over a year, I decided to go for the sprint.

I snapped the stinking valve off of my bike tube while I was pumping up my tires the night before the race, so I got to spend the evening changing my very first flat tire.  It was harder than I thought it would be, but now that I've done it once, I feel much more comfortable going out on my bike knowing that I can handle it if I ever get a flat tire.

The morning of the race, I woke up extra early to make sure I got up to the race on time.  When I was halfway there, I realized I had forgotten my bike helmet, so made an emergency stop at Wal-Mart to pick one up.  (It's hot pink.  I kind of love it.)

The race was pretty awesome.  We swam in the Chesapeake, and the water was incredibly choppy so after about 30 seconds I was already pretty pooped.  Don't worry, after I got warmed up I felt much better.   I also realized that I am not a huge fan of the wave start since throughout the whole swim I would take about 3 strokes and then plow into somebody.  But it kept me from getting off course like I did last year!

I learned from last year and actually ran to the transition zones instead of taking my time and walking.  Apparently that's what you're supposed to do when you're racing. 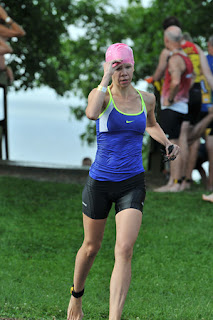 I decided on Thursday that it would be a really good idea to do a boot camp at my gym so that I get my money's worth out of my gym membership.  Too bad my quads felt like they were on fire after the class.  By Saturday morning, they were still burning so the bike portion of the race felt way harder than it should have.  It was a nice pretty course with rolling hills, but man, those hills killed me.  That's what I get for thinking that doing 100 squats would be no big deal.
The run was my favorite part because I passed a lot of people (don't worry, I don't have a competitive bone in my body.  ha.)  My legs felt like lead and I was 100% convinced I was running 11-minute miles, but they were actually 8-minute miles, so that was a pleasant surprise!  My favorite part of the race was that the race photos were FREE!  I have signed up for races based solely on the free race photos, so that was a huge plus for me!﻿ 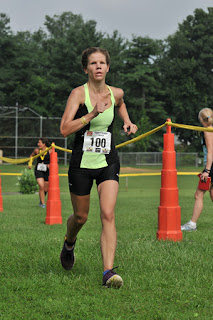 I think this was the most fun I have ever had in a race.  I decided that I am going to do a half ironman next spring.  I think there is one in The Woodlands that happens to be the same week as my break from school! If I can find one out here, though, that would be even better. 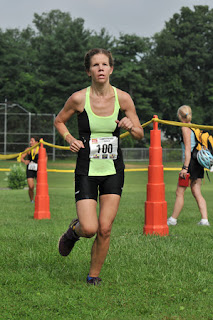 marathon training and other things

So this is week 1 of official marathon training.  It turns out that after taking a month off from any speedwork, I am not as fast as I was a month ago.  But don't worry, I still have 17 week left.  Half of me thinks it's really fun and exciting to be training again and half of me wants to die.

I just bought these new running shorts, because they are really cute and they were on sale ($7!!!) and we all know that 1) I can't pass up a sale and 2) I always think I need more running clothes.  Too bad they  make me look like I peed my pants. (I didn't.  It was just humid.  Good thing I'm not easily embarrassed.)  I guess I'll have to just wear these to the gym and as a swimsuit cover-up.  No biggie. 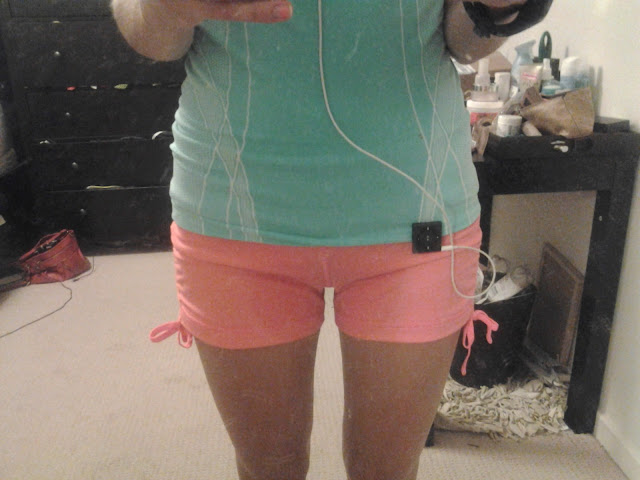 On another note, I recently made this macaroni and cheese, and it is the best macaroni and cheese I have ever eaten.  Step aside, Kraft.  (Oh, wait.  Kraft was never my favorite.  Never mind.)  So make it, and love it, and you can thank me later.  I also added lots of chopped vegetables to add a little bit of healthiness to it.

Also, is anybody else's mind not at all blown by this little mathematical tidbit? 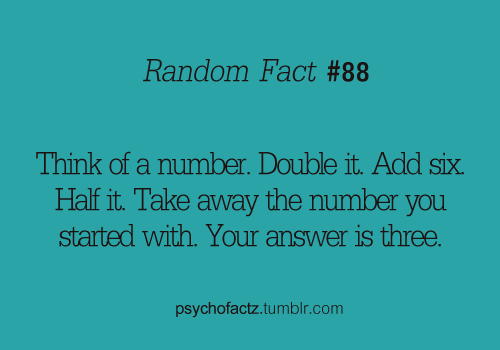 what i've been up to

Since school ended, I have been trying my best to enjoy my very last ever summer off.  (Sad.  But not that sad.)  I have made sure to fill up my days with lots of fun.  So here's what I've been up to:

1.  Lots of reading.  I headed to the library last week and checked out a few book, and am heading back again this week.  My favorite so far has been The Running Dream.  It is one of the best books I have read in a very long time.  I also read Cutting for Stone (excellent, after a slow start), Playing for Pizza (just okay), Mindless Eating (fascinating), and The Last Time They Met (I didn't like it until the last page, but then I changed my mind).  I am currently reading Animal, Vegetable, Miracle.  If anybody has other recommendations, let me know!

2.  Practicing French braiding my hair.  Trust me, I need practice.

3.  Signed up for a triathlon next weekend!  It is a really short one so I haven't trained much besides my regular biking/running that I always do, plus I have been swimming laps at my friend's pool.  I am pretty excited about it and might be ready for a re-match against Ryan next year.   Maybe a half ironman?  Now that I am in better shape I think I might be able to beat him...    This is also why I want to learn how to French braid.  French braids are the best triathlon hairdo ever.

4.  Practicing my new commute to school!   It is 45 minutes door-to-door, which might sound long, but the metro would take an hour and 15 minutes (assuming all of the trains/busses came on time.  Which, let's be honest, will never happen.)  Plus, the metro puts me in a bad mood.  Biking does not.  This will be for the best.

5.  Buying a lot of crap that I will need for the fall.  (A bike lock, a waterproof backpack, scrubs, a lunch box, etc.)  Going back to school is expensive.

6.  This week marks week 1 of official Outer Banks Marathon training!!  I put together a nice training plan and am very excited to see how this race goes.  My goal time is 3:25.  I think I can do it.  I snuck in a tempo run last week even though I was technically still "recovering" from my last marathon.  It gave me an excuse to run on the treadmill instead of outside in the blazing heat we've been having.  I might die.