The first thing that I learned in nursing school is that water fountains are clearly too low-class for us, so we obviously had to upgrade to Brita Hydration Stations.  Thank heavens for that. 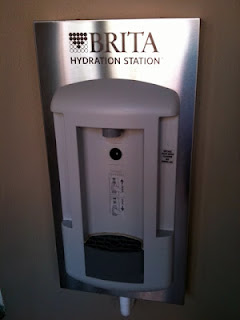 As a former teacher, I totally judged all of my professors on their teaching skills.  Luckily my pathophysiology professor is amazing.  I am pretty sure everyone else in the class is terrified (he comes on pretty strong) but the second he started talking I knew I was going to love this class.  I also sort of judged my abnormal psychology professor when he stumbled into class and then broke three pieces of chalk trying to write his name on the board, but then he started talking and is actually really funny so I forgave him for his inability to properly use chalk.  It can be tricky, I know.

Riding my bike to school wears me out a little bit more than I thought it would.  As it turns out, biking with a heavy backpack is significantly harder than biking with nothing.  I am still pretty excited about it, though.  Plus, the dean of the nursing school stopped me to tell me how great he thought it was that I biked to school, and bragged about how since he has his own office he can ride his fancy expensive bike without worrying about it getting stolen.  He didn't offer to let me park my bike in his office, though.  Bummer.

Lucky for me, the Friday clinical was cancelled so instead I have class all day Mondays and Wednesdays and clinical all day Tuesdays.  Which means no class Thursday or Friday!  It will be great to have a 4 day weekend to use to catch up on sleep study really hard.

After my first day, I am not regretting my decision to go back to nursing school, so I think that is a very godo sign.

It's okay, though, because I have checked everything off of my to-do list for nursing school.  Plus, it was kind of reaching the point in the summer where I felt like my brain was turning to mush from not using it.  I am pretty sure that shopping for the perfect backpack does not constitute brain use.

Don't worry, though, I have been filling my days with lots of running, lots of eating, and lots of hanging out with Sammy.  He thinks it's pretty fun. 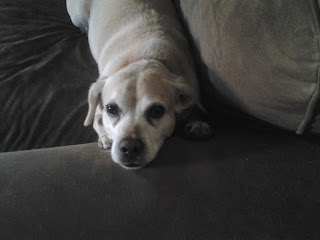 I am also trying this new thing where I only wash my hair twice a week.  My hairdresser said it would be good for my hair, so I decided to give it a try since I had nowhere important to go.  So far, it has been a smashing success.  My hair is much less frizzy than it normally is (which is pretty impressive considering the DC humidity), holds curl for longer, and is generally in much better shape than usual.  I think I might stick with this plan long-term.

On an unrelated note, I have been making homemade frozen strawberry lemonade all summer, and it is delicious.  Sammy gets really jealous when I don't share. 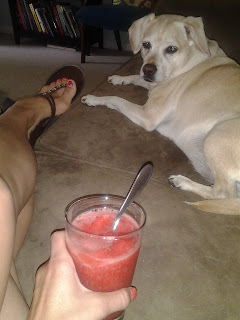 Last weekend I went down to Luray, VA with a friend who was competing in a triathlon.  I was a teensy bit jealous that I wasn't racing.  But then I remembered that I have lots of races coming up so I really have nothing to be jealous of. I also remembered that I am poor and cannot afford to pay for another race right now.  It was really fun to watch and cheer her on and made me excited to do some more triathlons next year. 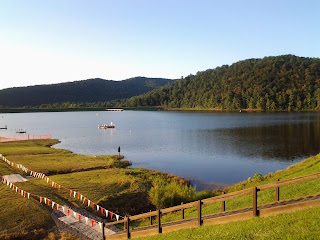 After I got home I did my long run for the week (15 miles).  My watch and ipod both died which made it less fun than normal.  The first 13 miles were at an average pace of 8:09, which made me pretty happy, especially considering the second half of the run is all uphill.
Only 4 weeks left until my first race of the season!  I have to say that I am getting kind of bored with just training and not doing any races.  ﻿

Because I know you are all on the edge of your seats wondering what race I am going to run next!!

Up until last week, I was only signed up for the Diva Women's Half Marathon in September and the OBX marathon in November.  That is clearly not enough races (running is fun, but racing is at least 180x more fun than just running.)  So here is my race calendar for the next couple of months:

Clarendon days 5k AND 10k:  This is a Pacer's event, which are always very well-run.  I am planning on using it as one of my "speedwork long runs".  My plan is to wake up early, run 10 miles from my house to Georgetown, then hitch a ride to the race start and race the 5k and 10k back-to-back.  I am pretty sure I will feel like dying by the end, but that's kind of the point.

Diva Women's Half Marathon:  Nothing too special about this race, but I needed a half-marathon to run, and this one was on a Saturday (which I prefer) and was close to home.  And small-ish.

OBX marathon:  Nice and flat, hopefully not too windy, and hopefully I can PR again.

Marine Corps Turkey Trot:  I usually don't LOVE 10k's (I prefer longer races) but I ran this last year and it was one of my favorite races ever.  So I am signing up again.

AND I am trying to convince Bexie that it would be really fun to run in a Turkey Trot 5k on Thanksgiving morning.  She is concerned about getting dinner finished on time.  (Priorities, I know...)