So, last week's Parkway Classic was one of my favorite races ever.  One that I will definitely be running again (probably annually).  The Nike Half Marathon, however, is a race that, while I enjoyed it, it was probably a one-time deal for me.  I got the necklace, I am happy. 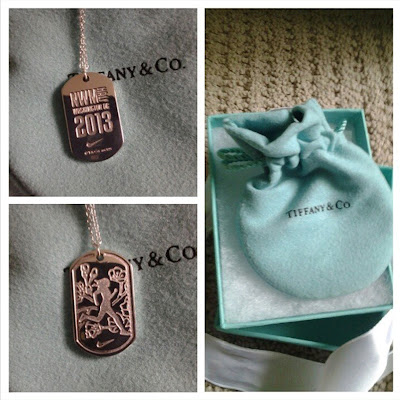 Things I liked about the race:

The fact that it was a women's race, and the fact that most people were running just to get a Tiffany's finisher necklace meant that it was not a very competitive field (to say the least).  I finished 311 out of 15,000 runners.  It was definitely fun to start way up at the front of the crowd and to only have a few runners in front of me.  It made me feel very elite (which I most definitely am not). 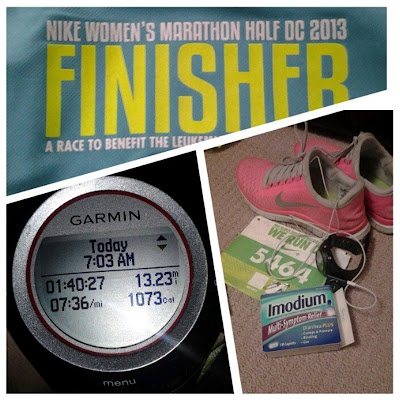 The tshirt and necklace are awesome.  The shirt looks nice and fits great (unlike most race shirts).

The course was beautiful, and Hanes Point (which is usually unbearably windy) was surprisingly mild yesterday.  That is always a plus.  Also, there were all kinds of motivational signs on that part of the course (it's a long 3-ish mile peninsula which has lots of wind and almost no spectators).

Shalane Flanagan was at the finish giving everyone a high five!!  I was insanely excited about this.  (And she is much shorter than I had pictured her.)  In case you didn't know, she is an Olympic marathoner.

Besides that, the race felt like one enormous Nike advertisement (which, I suppose, is exactly what it is).  There were no race photographers (besides those taking Nike promotional photos), the Expo was a temporary Nike store, and the "Finisher's Village" was a tent selling more Nike products (instead of the normal family meetup areas, spaces for people to sit, etc.)  In fact, you had to pass by the Nike "boutique" to even get to the medical tent.  The finish line was a red carpet, which is a really nice idea, but when you are wandering around looking for a trash can so that you don't lose your lunch all over the red carpet (which I may have done), it kind of loses its appeal.  Pacer's was technically running the event (the same people who organized last week's 10-miler), but the Pacer's rep that my coworker talked to said that Nike refused to take any of their suggestions for how to run a successful race.

Overall though, it was a really fun race, again with perfect weather (sunny and 50's) and I ran an 11-minute PR, so I am pretty happy with how the day went!!  Plus, did I mention that I got a necklace for finishing?  Definitely worth it. 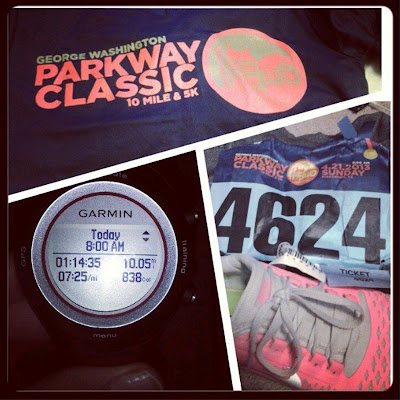 Last week, Erica and I ran the George Washington Parkway Classic 10 miler.  The weather was perfect (sunny and 40's) and the race was beautiful.  We started in Mount Vernon and ran up the GW Parkway to Alexandria.  I am pretty sure this race will become a yearly tradition for me - it was one of my favorite races ever.  Gorgeous course, just the perfect amount of rolling hills, very well organized, and a different course from most DC races.  And as an extra perk, all of the race photos are free!!! (Courtesy of Pacer's Running store, who organize and run the event.) 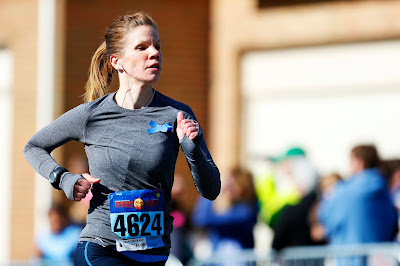 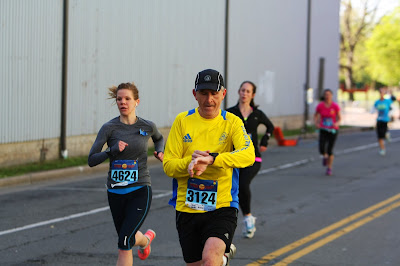 For your viewing pleasure, a graph of my mileage (running) for the past six months.  I think it's pretty obvious when my marathons were. 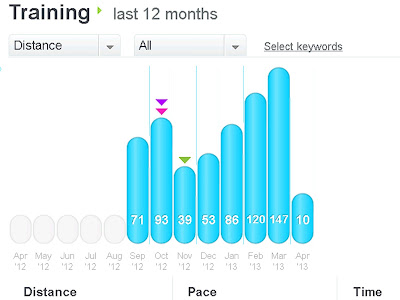 Also, this is (hopefully) the week that I start hearing back from Nursing schools.  I am really hoping for good news.

I have a scholarship interview with Georgetown this Saturday.  The part that is stressing me out the most is figuring out what on earth I am going to wear.